Fierce and Wonderful, Fantasy and the Girl/Woman Reader 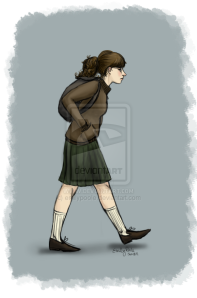 God, I love Meg Murry!  Awkward and insecure, she feels out of place in her family where everyone seems to be special in their own way.  Throughout A Wrinkle in Time, Meg battles through her insecurities to become an unlikely and true heroine, saving her brother and her father over the course of an inter-dimensional journey.  Meg was not special because of the clothes that she wore (not important at all) or because of the boy who liked her (she did have a crush that developed in the novel, but this was a sub-plot); she was amazing because she wrestled with and overcame her personal demons and some scary villains too.  She did not need to be rescued by anyone.  She was the one doing the rescuing.  Meg was one of my earliest introductions to a empowered girl character (and as you move through the series, which includes four other books, woman) and she is one of the reasons why fantasy is so important for young women.

Meg is one of the reasons why I was drawn to fantasy as a teenager.  Besides her, there were so many others: Justice Douglass (The Justice Trilogy), Kaeldra (The Dragon Chronicles), Lauren 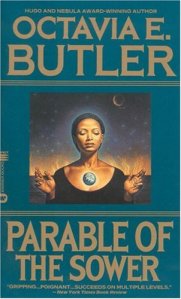 (Parable of the Sower and Parable of the Talents), etc…  Here were girls who were smart and kicked butt.  These were girls who were supernatural and girls who possessed only their wits; either way, they were able to use those strengths to outwit and triumph over all manner of monster and challenge.   In fantasy, the trials and tribulations that we–as girls and women–face every day took on epic proportions.   The lives of girls and women took on new significance, as the fates of worlds and lives rested in their hands.  These were heady books: sometimes sad, sometimes funny, and even occasionally sappy–but always a celebration of the inherent power that all girls and women possess.  Through these characters, I could see a way to grow into the woman that I wanted to become–smart, independent,…a shapeshifter–and imagine new possibilities for myself.

Not only were the characters an inspiration, but so were the authors.  Madeleine L’Engle, Virginia Hamilton, Susan Fletcher, and Octavia Butler (among others) created these amazing and fantastical worlds that were as real to me as the streets outside of my window.  I marveled at their ability to construct universes that were so far from my own and yet so vivid and resonant.  As an writer with aspirations to one day publish, I learned, from these women, how to cast my imagination beyond the obvious and how to seek the human in the worlds that hide  there.

Tagged as A Wrinkle in Time, parable of the sower, UtopYA Con, women and girls in fantasy

What do you think? Cancel reply