After the break last week, I am taking a pretty huge leap forward on the 20th century timeline.   As of right now, I have not found any speculative fiction published by African Americans in the  mid part of the decade.  I do not think that this signals an absence of Black speculative fiction production during this period, but rather that I am not looking in the right places yet.  (To that end, if any readers have authors from that period that they would like to suggest, I am all ears–or eyes as it were.)

The cool thing about moving into the latter half of the twentieth century is that not only do we see more and more authors who are writing in the speculative fiction realm, but there are more an more authors who write speculative fiction almost exclusively (as opposed to some of the earlier authors that I have listed, whose primary body of work would be categorized differently). 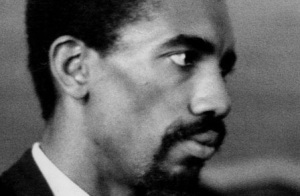 During his life, Dumas had several careers including a stint in the military, as a teacher, and even a year at IBM.    As a writer Henry Dumas is remembered primarily a poet, but he produced works in many genres including short fiction.   Poetic rhythms and structures infuse even his prose pieces.   All of his writing reflected his lifelong love of African American and African diasporic folklore and musical traditions.

His pieces echo the cultural touchstones of his era, including jazz and elements of the “Black Aesthetic” movement.  Dumas uses these elements to inject speculative premises into familiar landscapes a scenes.  “Will the Circle Be Unbroken,” for example, is set in an underground jazz club.  The protagonist, Probe, has a chance to test an instrument of lore, charged with the power to cleanse the new world.

Most of his works, including short story collections such as “Arks of Bones” and Other Stories, were published posthumously, after his tragic and untimely death.